Float Switch - How they Work

A float switch detects the liquid level in a tank or container. The switch floats on top of or within the liquid and acts as a mechanical switch as the liquid level goes up or down. Float switches control devices like pumps (by pumping the water in or out), valves (by opening/closing the inlet/outlets), or alarms to notify users. Float switches are cost-effective and reliable, and they are suitable for applications with various liquids.

How does a float switch work?

A float switch moves up and down with the liquid level. Depending on the counterweight and pre-set trigger, the mechanical switch opens or closes when it rises or lowers to specific levels. When the switch closes, an electrical current passes through the switch to the connected device. For example, when an electrical current is sent to a pump, the pump turns on.

A float switch consists of a hollow floating body and an internal switch, also called a sensor. The most common internal switch is a reed switch that has a magnet inside the body. There are other internal switch types, but all of these switches use the same working principle. The mechanical switch creates an open or closed electrical circuit depending on the water level within a tank or pond.

A vertical float switch installation either has a "fixed point" or an external counterweight. The liquid level controls the angle of the float switch, which directly controls the magnet's position. At a preset level, the internal mechanical switch goes between the open and closed positions. Figure 2 (left) shows a common application of stopping water inflow at a ‘high’ point in a water tank. Figure 2 (right) shows a similar application, but it detects a ‘low’ point in the water tank and works reversely. Therefore, it is essential to wire an electronic float switch correctly and to set the preset liquid level specifically for an application. Read our article on float switch wiring for more details on how to wire a float switch.

Figure 2: Float switch installation examples of filling (left) or emptying (right). Position 1 signals a pump to turn on or off, depending on the wiring

Figure 3: Float switch with a counterweight in a water application. common-float-switch-installation-counterweight.png

Proper float switch wiring is crucial to ensure appropriate electrical signals based on the open or closed position of the switch.

Note: The ‘normal’ operation may differ for different float switch brands and types. Please read the product’s manual on how to wire it in either configuration. Also, wells and water tanks use dual float switches to empty or fill the water within the structure. 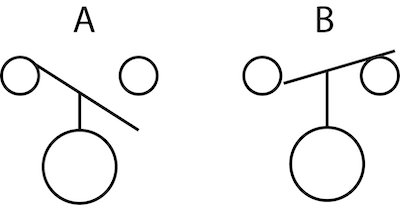 A wide range of liquids, from potable water to highly corrosive chemicals, uses float switches. Hence, it is necessary to ensure the switching material remains compliant with the media. Read our chemical resistance chart for more information on the suitability of various materials with the media involved.

Stainless steel is highly durable, and the material is suitable for liquids involving high-temperature applications. The material is compatible with highly corrosive chemicals and various sanitary and washdown conditions, making it an ideal choice for medical and food processing industries.

The KPM series is the most common float switch type due to its high reliability. The switch is ideal for clean water and suitable for many other media. The KPM opens or closes the electrical circuit at an angle of ±45°. The cable length after the counterweight defines the fluid level at which the switch operates. 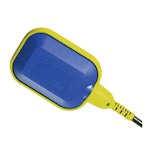 The MPM series has a double liquid-proof chamber giving the switch high reliability and protection on the inside while still being small (micro). The shape and large size of the switch make it suitable for sewage water application, but it does require a counterweight. The MPM opens or closes the electrical circuit at an angle of ±45°. The cable length after the counterweight decides the fluid level at which the switch operates. 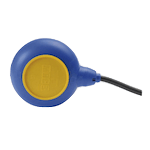 The JPM series type is a tilt-level switch that consists of a heavy body free of irregularities. The series doesn’t require an external counterweight and rotates around itself when submerged in a liquid. These features make it suitable for turbulent water and industrial wastewater. Typically used in pairs to enable two functions (emptying and filling). The JPM series enables a normally open (NO) or normally closed (NC) function. 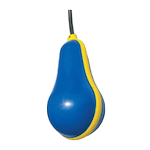 A float switch monitors the liquid level in various residential and industrial applications. The switch is typically connected to a pump, valve (e.g., solenoid or electric ball valve), or an alarm to notify a user. Due to the variety of designs and types, they can be used in various applications. Common examples are:

What is a float switch?

A float switch detects the level of a liquid in a tank. Based on the water level, it will open or close an electrical circuit generally used to pump water in or out of the tank.

How does a float switch work?

What does a float switch do?

A float switch monitors the level of a liquid in a tank. It then opens or closes an electrical circuit based on the liquid level and wiring to control external components.

How do you install a float switch?

A float switch is installed in a liquid tank. Firstly, a pre-set level is made and can be done with a counterweight. Then, based on a normally open or closed wiring configuration, it will open or close the electrical circuit based on its movement up or down with the liquid level.

How to wire a float switch?

How to install a sump pump float switch?

A sump pump float switch detects a rise in water in a sump pump. Commonly installed in the normally closed position, the electrical circuit will close as the water rises. This allows current to pass to signal a pump to pump water out of the tank.