Safety Valves - How They Work 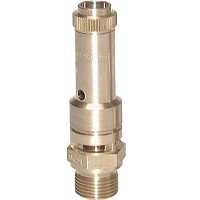 A safety valve protects a system against overpressure. Overpressure occurs when the system's pressure exceeds the Maximum Allowable Working Pressure (MWAP) or the pressure for which the system is designed. Safety valves can open very quickly compared to relief valves. A safety valve opens from a set pressure; the valve first opens a little, then opens fully so that the unwanted pressure is removed from the system as quickly as possible.

Safety valves prevent pressure increases that lead to malfunctions, fire hazards, or explosions. The system's media fully actuates a safety valve, keeping it working in a power failure. Safety valves only have mechanical parts, which operate when electronic or pneumatic safety devices fail.

There are different safety valve types: valves with a spring-loaded mechanism, valves with balanced bellows, and pilot-operated safety valves. Each type has an advantage in a specific situation.

The most common safety valve is a spring-loaded or direct-acting safety valve. An advantage of this type is that it is available for pressure ranges from approximately 1 to 1400 bar. The mechanism consists of the following components:

The balance between a safety valve’s spring force and the input force controls the valve’s opening and closing. Inlet pressure and the disc’s surface area that the media interacts with determine the input force. According to Pascal’s Law, force is equal to the product of pressure and area. Therefore, as the area of the disc that the media interacts with increases, so does the force.

The most important characteristic of safety valves is that they open fully in a short period to reach maximum blow-off capacity in minimal time. This is possible because the valve’s disc has a larger diameter than the nozzle. As soon as the inlet pressure is high enough, the disc lifts. At this moment, the disc surface at which the medium can reach becomes larger. This results in an input force much greater than the spring force, and the valve completely opens.

Special safety valve versions exist for incompressible and compressible media and gasses/vapors. Safety valves for gasses and vapors often open before the set pressure is reached and open to at least 50% lift at the response pressure (see Figure 3

Safety valves of this type have a significant disadvantage: they are very susceptible to back pressure. Backpressure can negatively affect the valve's safety. 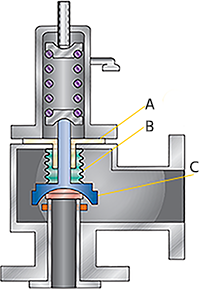 Balanced bellows safety valves are not susceptible to the negative impacts of backpressure. Bellows (Figure 4 labeled B) above the disc ensure that backpressure is evenly distributed above and below the disc. Furthermore, the spring does not encounter the media, preventing undesirable influence on the spring from the media. The downside of balanced bellows safety valves is that their MAWP is lower than direct-acting safety valves. They operate up to a maximum of 15.9 bar.

A deadweight safety valve is the simplest type of safety valve. It consists of a gunmetal valve on top of a boiler's vertical steam pipe. When pressure within the boiler rises enough, steam lifts the valve until it reduces enough for the valve to fall back into its seat. This type of valve is only suitable for stationary applications.

To protect your system against overpressure, it is essential to understand the five selection criteria below. Please read our technical article on selecting safety valves to better understand these criteria. 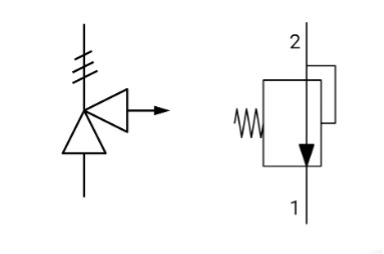 Safety valves must comply with various national and international standards for safety and quality. To ensure that the product complies, please consult local standards.

The TÜV certification assesses a product's safety and verifies that it meets the minimum requirements under the Pressure Equipment Directive (PED) 2014/68/EU. The PED outlines the standards for designing and manufacturing pressure equipment such as pressure relief devices, steam boilers, pipelines, and pressure vessels operating at a maximum allowable pressure greater than 0.5 bar.

The ASME (American Society of Mechanical Engineers) ensures the specification and accreditation of pressure vessels, boilers, and pressure relief devices.

The ISO 4126 standard is a general specification for pressure relief valves, regardless of the application’s media.

What does a safety valve do?

What is the difference between a relief valve and a safety valve?

A relief valve will not immediately halt the operation of downstream components, whereas a safety valve will.

What are the types of safety valves?

What is an ASME safety valve?

An ASME safety valve meets the requirements of the ASME pressure vessel code’s Section I. These valves must have a large constant flow rate at no more than 10% overpressure.