A pneumatic cylinder is a mechanical device that creates a linear motion by converting energy from compressed air. Common pneumatic cylinders follow global standards for inter-changeability and the two most common standards are ISO 6432 for mini round cylinders (Ø 8-25 mm) and ISO 15552 for profile cylinders (Ø 32-320 mm). Pneumatic cylinder accessories are used for mounting or for coupling it to a load. Some accessories are included in ISO 6432 and ISO 15552, so they can be interchanged with any brand. However, they can be used with non-ISO cylinders if the mounting specifications match. Mounting accessories will affect system performance, reliability, and overall design. Based on the intended function and system requirements, the correct mounting accessories can be selected.

The three different main cylinder mounting styles are: fixed centerline mount, fixed offset mount, and fixed pivot mount. Depending on the needed function of the pneumatic cylinder and application, the correct mounting accessory can be selected.

Centerline mount cylinders are fixed to a surface and will absorb force along the centerline of the cylinder, as seen in the common examples in Figure 1. Centerline mounting can be used in applications where the load is pushed or pulled in a linear path. This mounting style will evenly distribute forces along mounting bolts and minimize side loads during actuation. This reduces the possibility of misalignment and will decrease stress along the piston and rod bearings to prevent premature failure. The three most common centerline mounting types are centerline lug, flange, and tie rods.

Flange mounting a pneumatic cylinder allows for good centerline force transfer and easy assembly/disassembly. Flanges can be mounted on the cap-end (back) or rod-end (front) depending on if the load is subjected to a push or pull force. A rod-end (head-end) flange is used for pulling applications while a cap-end flange is used for pushing applications, however, typically both are used for a more secure mounting.

Flanges are available in square or rectangular styles for increased strength and rigidity. Mounting holes are also available for easy assembly and disassembly. A disadvantage of flange mounted cylinders is its low tolerance for misalignment. Misalignment will cause side loading and premature cylinder failure. Examples of flange mounted cylinders can be seen in Figure 1 (examples 2 & 3), Figure 2 for an ISO 6432 cylinder with a front flange, and Figure 3 for an ISO 15552 cylinder with a back flange.

Fixed offset mounting is similar to fixed centerline mounting as it is fixed to a mounting surface and forces are absorbed along the center line of the cylinder. However, the cylinder is mounted offset from the center at the sides or feet of the cylinder. This allows for the easiest assembly and disassembly and can be used for both pushing and pulling of a load. However, with the mounting being offset from the line of force, a side load can be created. Therefore, the cylinder should be pinned or keyed to absorb the stress of shear loads and allow the mounting bolts to remain in simple tension. The cylinder is also more prone to movement with load change, so rigid connection of plumbing is not advised due to possible leaks. The two most common types of offset mounting are side mount and foot mount, which can be seen in Figure 4.

Figure 4: Common off-set mounting styles and their accessories: side mount (1) and foot mount (2 & 3)

Side mount cylinders are rigidly mounted to a surface and will absorb force away from the centerline of the cylinder (Figure 4 example 1). A cylinder will have mounting brackets along both sides to secure the cylinder to an assembly. The mounting surface should also be designed to handle the induced torque from the mounting bolts and cylinder during actuation.

Foot mount attachments can be used on the front and back of the cylinder for mounting, as seen in Figure 4 (example 2 & 3) and Figure 5. Cylinders with a large bore and short stroke will have an increased shear stress on the mounting bolts and may cause misalignment issues if not properly sized. ISO 6432 and ISO 15552 conforming cylinders typically use a foot bracket for mounting a cylinder. 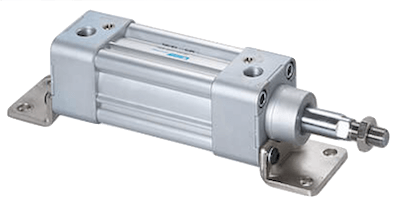 Pivot mount cylinders are fixed to a surface and will absorb force along the centerline of the cylinder, as seen in common examples in Figure 6. Fixed pivot mounting allows for changes in alignment in one plane. Pivot mount attachments are useful for absorbing slight misalignment to protect the cylinder rod from bending stresses. Pivot mountings are often used with accessories such as rod end attachments that also provide a pivot point. Although pivot mount cylinders provide rotational freedom, if the rod is not properly guided the piston rod will be subjected to bending stresses. The two most common pivot mounting types are clevis and trunnion. Clevis (Figure 6 example 2 and 3) and trunnion (Figure 6 example 1) attachments are used in ISO 6432 and ISO 15552 conforming cylinders.

Fixed pivot mount cylinders rotate during actuation in one plane and absorb force along the centerline of the cylinder, as seen in Figure 7. This mounting accessory is required when the load travels in a non-linear path. Push and pull applications are suitable for this mounting accessory, however, the effective thrust will be reduced depending on the angle between the lever that attaches to the cylinder and cylinder thrust direction. The effective thrust (Fef) during actuation can be calculated with the following formula:

Piston rod diameter should be properly sized for push applications with a long stroke. This is required to prevent rod buckling when the cylinder is fully extended and subjected to a greater torque. A torque moment created by a misaligned rod is also known as side loading. Side loading is the most common cause of cylinder failure. A guide to prevent misalignment is also recommended to prevent rod bending.

Clevis attachments can be mounted directly to the cap-end and are bolt mounted to the cylinder. Depending on the coupling the clevis will mount to, a female or male style coupling can be used. The bolts securing the clevis attachment to the cylinder is designed to handle the shear forces generated from the opposing forces generated during cylinder actuation. In applications where slight misalignment is expected a spherical bearing can be used to relieve the rod of stress. 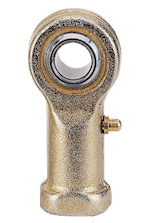 ISO 8139 defines the mounting dimensions of a rod-end spherical eye for pneumatic cylinders, which is used as a rod-end attachment for load attachment. Rod-end spherical eyes are also commonly called rod-end eyes and use female threads to attach to a male threaded piston rod. A pin and clamp (or clevis) are used to couple a load to the rod-end eye.

Rod-end eyes, as seen in Figure 8, are suitable for linear (push or pull) and non-linear load travel. This attachment is typically coupled to a female clevis attachment with a pin. This allows the cylinder body to rotate, while the piston rod is applying force to the load. If the force is not applied along the centerline of the cylinder due to misalignment, unwanted forces on the piston rod and bearings can occur. These accessories can compensate for misalignment issues by tilting with cylinder motion.

A pivot pin is used to couple pivot and centerline mount style attachments with another mount accessory or load coupling.

Trunnion brackets are rigidly mounted and provide a pivot point for trunnion pins. The bracket will act as a guide to prevent misalignment and smooth rotation about the trunnion pin.

An angle eye bracket is coupled to a cap-mounted female clevis using a pin and allows the cylinder to rotate about its mounting surface.

Floating joint accessories are coupled to the load and threaded onto the pneumatic cylinder’s rod-end. They allow for off-centering or loss of parallel accuracy between the cylinder and the driven body. Typically, they have a rotational angle range and linear deviation specification. This allows for a reduced installation time and cost as other components (and installation) don’t require strict tolerances. They are compact, simple, and rigid allowing for repetitive usage of both compression and tension forces.