Electric Valve Actuator - How They Work 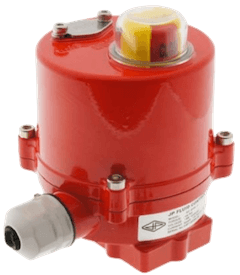 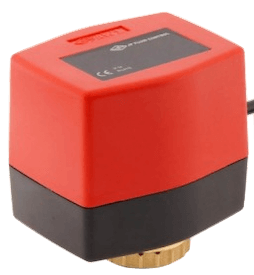 Electric actuators for quarter-turn valves are a type of rotary motorized valve actuators. Electric rotary actuators convert electric energy into rotary force, so a quarter-turn electric actuator can only turn 90 degrees. The electric motor generates torque, which is transmitted to turn the valve through an output drive. The motor voltage options are either AC (alternating current), DC (direct current), or they are able to operate on either one. The motor is housed in a robust, compact housing that also contains other components of the actuator such as gearings, limit switches, wiring, etc. The whole assembly is connected to a valve through a compatible connection interface, such as an ISO 5211 standard.

Quarter turn valves require a 90° turn to completely open or close. To turn the valve, torque (the rotational equivalent of linear force) is required. The electric actuator generates this torque and transmits it to its output shaft, which is then connected to the valve’s stem, or shaft. This, in turn, rotates the valve’s ball or disc and opens or closes the orifice to allow flow through or block the flow. The amount of torque generated by an actuator is dependent on its gearing and motor capacity. The motor capacity (torque) is an important specification for the actuator as it needs to be higher than the valve’s required torque to ensure it can open and close the valve. Usually, the breakaway torque is specified as the required torque of a valve as this is the highest torque required to rotate the valve.

Response time is the time needed for an actuator to turn the valve a full 90 degrees (i.e. to fully open or close a valve after the command has been given). Like torque, the speed of an actuator is related to its gearing and the power of its motor. The torque and speed of an actuator are directly related as torque is inversely proportional to speed. This relationship is affected by gear arrangements. For a given actuator motor capacity, a higher gear ratio would result in more torque and a slower response time than a lower gear ratio. Therefore, if response time is a critical application specification it needs to be looked at with the torque specification requirement.

Common electric valve actuators have either 2-point control (commonly referred to as just on/off) or 3-point control, but they both have 3 wires. See our electrical wiring section for more information. 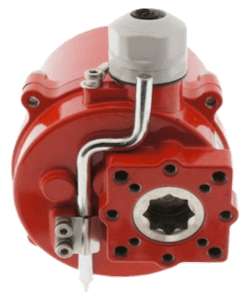 Quarter turn actuators have a connection interface that connects them to a valve. This comprises of an output drive, a shaft square or stem to connect the valve head, and a flange to bolt the actuator to the valve. The design and dimension of this connection interface may be brand-specific or standardized to standards such as ISO 5211. Examples of quarter-turn actuators with brand-specific connection interfaces are the AW1 series ball valve actuators by JP fluid controls. These valves are compatible with JP fluid controls’ BW2 and BW3 valves. The AG quarter-turn actuator series, on the other hand, have a standardized ISO 5211 connection interface and are compatible with all valves with an ISO 5211 flange. Figure 2 below shows an ISO 5211 flange type. Regardless of brand, different valves and actuators can be interchanged as long they follow the same ISO 5211 standard. Under the ISO 5211 standard, there are different flange types that vary by maximum flange torque, dimension, and the number of screws, bolts, or studs.

Position indicators indicate the position, open or closed, of the actuator at a given time. There are visual indicators, such as in Figure 3, but there are also electric position feedback systems to send the position back to your system (i.e. controller). Position indicators have two basic switching options; mechanical switches and proximity (non-contact) switches. Mechanical limit switches are activated by internal cams on the output drive shaft. Mechanical switches might also be limit switches. Proximity switches are activated by sensors, which detect valve position. Position indicators may display only the basic on and off positions or also capable of indicating partly opened or partly closed.

Manual override is a safety feature present in most actuators. It is usually a mechanical handwheel or handle. This wheel allows you to mechanically close or open a valve in case of power failure or any other emergency.

Fail-safe is an important safety feature in some automated valve actuators. The fail-safe is designed to close or open a valve whenever there is a power failure. Such a system requires a form of energy storage, such as a spring mechanism or a battery. Typically, the fail-safe mechanism will close the valve. In a spring mechanism, a loaded spring automatically shuts off the valve when power is cut off. For a backup battery system, often called a battery safety return (BSR), a battery powers the actuator to close it. Depending on the battery and actuator size, charging time and the total amount of turns will vary. For extra redundancy, some actuators will have both versions of fail-safe incorporated into the design. As mentioned, most fail-safe operations will close the valve, but certain applications require the valve to open upon power failure. An example of such an application is the flow of cold water entering a heat exchanger. This is because cold water would be required to cool the remaining warm fluid, in order to prevent overheating.

Certain electric valve actuators have the capability to carry out modulating control, which is often referred to as DPS (digital positioning system). This is the ability to accurately position the valve at any point between fully opened and fully closed (i.e. between 0° and 90°). This is necessary for applications that require the variation of flow rate. Typically, modulation is achieved using a control loop system and a positioning circuit board (PCB) placed in the actuator. To learn more about modulation, read our modulating valve article.

This section seeks to explain the various wiring possibilities for 2- and 3-point electric valve actuators as there are significant differences between the two.

Before installing, verify that the actuator code matches the connection diagram. Improper installation can permanently damage the actuator or lead to dangerous situations. The actuators have internal position switches, which results that only energy is consumed during opening or closing.

Electric valve actuators have a protection class IP (ingress protection) rating. The IP rating specifies the actuator''s degree of protection against dust, water, and other environmental hazards. The IP 54 rating of AW series ball valve actuators means that these actuators are partially protected from dust and can resist water spray.

This is an international IEC (international electro-technical commissions) standard for rotating electric devices. For electric actuators, it specifies the duty type and duty cycle of their electric motors. An actuator rated S2 30min can continuously operate short-time duty for 30min after which the motor should be allowed to rest. It can be restarted after its temperature has returned to room temperature.

ATEX directives specify what equipment can safely operate in an explosive atmosphere environment. An ATEX certification for an actuator means that the actuator is explosion-proof in a particular environment. See our flowchart to determine if you need an ATEX actuator or if you need further understanding of your ATEX label.

The LVD certification ensures that low voltage electrical equipment, such as actuators, provides sufficient protection for its users.

An EMC-certified actuator neither generates nor is affected by electromagnetic disturbance.

Electric quarter-turn actuators are used to remotely control ball and butterfly valves. They greatly increase the ease of operating quarter-turn valves by providing remote, automated control. They also provide sufficient torque for valves that require higher torques than cannot be generated by a human. These actuators are used in industrial automation, irrigation, water supply, fluid dosing, heating systems, and fluid transportation or transfer.

How to wire and install electric valve actuators?

Installation and wiring methods for electric actuators vary by model. However, detailed wiring and installation instructions for the AW and AG series actuators can be found here.