Steam Hoses - How They Work

Steam hoses are specialty rubber hoses designed to convey steam to and from various points in a process. These hoses are generally made from synthetic Ethylene Propylene Diene Terpolymer (EPDM) rubber due to its excellent resistance to heat, water, steam, acid and alkalis, ozone, and sunlight. In general, all steam hoses have a steel/high tensile strength material inlay except for special use low-pressure steam hoses. Steam hoses are classified into two types: low pressure and high pressure, and each type into two classes discussed below.

View our online selection of Hoses!

Steam is the gaseous state of water. Most mineral substances available on earth can exist in three physical states: solid, liquid, and gas. It is also referred to as the different phases of the substance. In the case of water (H2O), the terms ice, water, and steam are used to denote the three phases, respectively. The water molecules are packed close together in the solid-state, preventing them from changing shape. In the liquid state, H2O molecules move freely, breaking and forming a bond again. As water is heated, the molecules gain sufficient energy to break free from the hydrogen bonds that keep them together in water, and these ‘free’ molecules enter the gaseous phase as steam. Steam is used as a heat source for propulsion in various industrial processes.

There are three types of steam depending on the temperature and pressure: dry, wet, and superheated steam. The different forms of steam are used for various applications and require proper hose selection to ensure efficient steam transfer.

Dry steam, also known as saturated steam, refers to steam whose water molecules do not condensate (water vapor turning back into liquid water). Dry steam is formed when water is heated to its boiling point and then vaporized with the help of additional heat. Dry steam exhibits various properties, which makes it an excellent heat source. For example, rapid and even heat transfer improve the desired process's quality and productivity. It is also safe, clean, and low cost as it originates from water.

Wet, or unsaturated, steam refers to steam that has the presence of moisture in it. When water is heated to its boiling point and vaporized, some water molecules lose their latent heat energy and condense to form tiny water droplets. The mixture of water droplets with steam is called wet steam. Figure 2 shows the formation of wet steam.

Superheated steam is obtained by heating dry (saturated) steam beyond its saturation point. At the same pressure, superheated steam can provide higher temperatures and lower density when compared to saturated steam. Superheated steam is mostly used in the power generation industry for the propulsion of turbines. In a superheated state, steam does not condensate inside the steam-driven equipment. This maintains the dryness of the equipment and reduces the risk of corrosion.

Oil-resistant steam hoses suffer little or no degradation when exposed to oil. These hoses are typically designed to withstand high temperatures up to 207°C (406°F) for saturated steam and 232°C (450°F) for superheated steam. Figure 3 shows an example of an oil-resistant steam hose. Steam hoses with oil-resistant covers are used in chemical plants, refineries, and processing factories where there is a chance for the steam hose to be in contact with oil.

Non-oil resistant steam hoses are designed for general applications like moisturization and heating (discussed later in the article). Typically, they have more service life than oil-resistant hoses but are prone to damage if exposed to oils or high temperatures, especially in industries exposed to hydrocarbons like diesel-based inverted muds, lubricants, and cleaners. Under such exposure, these non-oil resistant covers soften and swell, causing them to tear. As a result, the hose gets exposed to moisture, initiating corrosion and losing its ability to contain pressure.

Steam can be dangerous and costly to work with. However, it is also a vital driving force of many industrial processes, as discussed later. Therefore, special attention must be given when selecting, installing, and fitting steam hoses. The following points require attention to prevent damage and increase the life of a steam hose.

Figure 4: Temperature vs pressure range according to steam type

The inner layer of steam may absorb water or water vapor during use. Once the hose cools down, it condenses the steam into water trapped inside the rubber hose. When the hose is used subsequently, the trapped water expands considerably, creating air bubbles in the inner wall due to the increased volume. As a result, blisters are formed on the inner wall, blocking and contaminating the steam with rubber pieces. The damage thus caused is called popcorning.

One of the measures to prevent steam hoses from popcorning is to blow dry them after each use. But it is a time-consuming process and very rarely done, further increasing the risk. Steam hoses with extruded inner walls can also be used to avoid this problem in addition to draining. These extruded inner walls are made from gas-tight rubber and are seamless and homogeneous. So, the water vapor cannot penetrate the walls, thus preventing popcorning.

Steel inlays are fitted into steam hoses as a standard practice. Due to the porous inner wall in these rubber hoses, steam comes into contact with the steel inlays, leading to corrosion. Since the corrosion takes place beneath the surface, the damage may stay hidden, leading to dangerous consequences. The weakening and cracking create escape ways for the steam without any warning. In such a situation, if the pressure is increased to maintain a constant flow of steam, the risk of bursting a hose increases, which can be a dangerous situation. 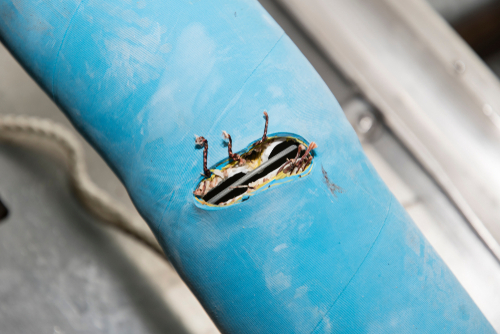 How to select a steam hose

Selecting a steam hose for your application requires careful consideration. The main selection criteria are:

Steam is used for various applications in a wide range of industries. According to the requirement, steam hoses are used to channel dry, wet, or superheated steam for these applications. Some of the common industrial applications are discussed below.

Steam turbines use steam as a driving force for propulsion applications. Steam turbines are used in thermal electric power plants to generate electricity. Steam hoses are used to move the steam from one place to another. This helps in the formation of energy through the movement of heat particles of the steam.

Steam cleaning is also a common application requiring steam transfer. One example includes steam cleaning with soot blowers. Soot/deposits, when stuck to the heating surface, act as insulators preventing the smooth transfer of heat. Soot blowers remove these deposits from the furnace walls. Boilers are generally equipped with soot blowers, which release steam through the nozzle, thus removing sintered ash and slag.

In some industries, steam is used when the process requires moisture and a heat supply at the same time. Some examples include the paper production industry and pellet mills. In the paper industry, moisture is supplied to paper moving over rolls so that they do not suffer microscopic wear and tear, and at the same time it improves sheet strength. In the production of pellet mills, steam is used to dry and provide water content to the feed materials.

Many facilities use low-pressure saturated steam as their primary source for indoor heating. This is especially common in cold climate regions. Steam hoses are used for steam transfer purposes in such settings. When cold air is heated by HVAC coils, the air humidity drops. So, it is often combined with steam humidifiers that inject dry saturated steam, conditioning the airflow, thus providing indoor comfort, preservation of books and records, and infection control.

Steam atomization is the process of mechanically separating fluid using steam. This process is mainly used in oil burners to maximize combustion efficiency and minimize soot production. When the steam is injected through a steam hose, the oil breaks up to form small droplets which mix with air allowing for efficient combustion.

Steam as a motive fluid

Steam is used as a motive fluid to force the movement of other fluids in piping. High-pressure motive steam passes through the nozzle to the jet ejector, which is then diffused. This results in an increase in velocity and a decrease in pressure. The high-velocity motive fluid combines with air from the surface condenser, thus flowing at an intermediate pressure. This process is used on distillation towers to separate and purify process vapor streams.

View our online selection of Hoses!