When power is supplied to the coil, the plunger rises and pushes against the spring force to open the valve. Without a power supply, the plunger is pushed against the valve seat by a spring force to close the valve outlet. In contrast to a standard direct-operated solenoid the plunger position of a proportional solenoid valve can be controlled across a range of stroke positions by varying the power supplied to the solenoid coil. Valves suited for proportional control have a slightly different design to improve the position stability of the plunger at intermediate positions. The valve power supply is typically automatically controlled using a pulse-width modulation (PWM) controller such as the Burkert 8611 (Figure 1 left) or 8605 (Figure 1 right) controllers. They are referred to as proportional valve controllers 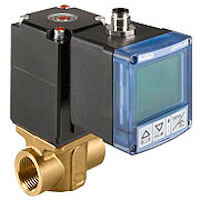 Burkert’s 8611 and 8605 types are both equipped with control technology to generate pulse width modulation (PWM) output signals to control proportional solenoid valves in a system.

Although the PWM voltage pulses to the coil are square, the current is delivered to the coil in a “saw tooth curve due to coil inductance and duty cycle (Figure 2). The result is a steady oscillation of the plunger in a balanced state which is commonly called “dither. Dither reduces static friction and decreases hysteresis (where actual plunger position lags behind command position). In Figure 2, the time off (toff) and time on (ton) are from the duty cycle and the nominal voltage (U) is what is supplied creating the resulting voltage (I) wave. 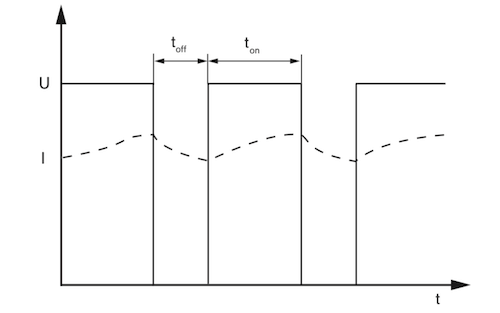 Valve sensitivity and dither movement are influenced by coil properties, switching frequency, and duty cycle. Valve reaction to a PWM signal is most sensitive when operated in a specific switching frequency range (f) at an optimal duty cycle. The point at which the valve is most responsive is known as the “working point. The working point is shown in Figure 3 at the intersection of the upper frequency and 60% duty cycle. At its upper (fHI) and lower (fLO) frequency limits the valve will react more slowly to a PWM signal. An example of the ideal operating range of a proportional valve is shown in Figure 3. 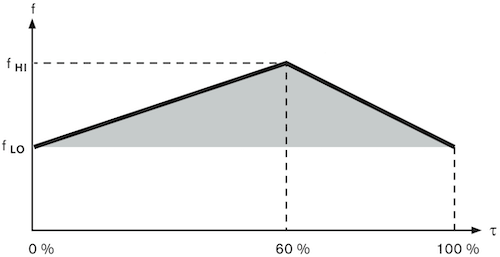 The limit frequencies, optimal duty cycle, and coil properties are all unique and crucial for accurate control of any valve. Malfunction of the valve or higher audible noise may result if a valve is controlled with incorrect operating parameters.

The benefit of using the Burkert proportional valve series with their controller, is that the correct switching frequencies and operating points are known for all valves. Burkert determined these values empirically for each valve type. The 8611 memorizes the switching frequency limits of all Burkert valves. During configuration of the controller the valve type can be entered, and the operating parameters are automatically loaded into the control scheme without further configuration. The 8605 includes most frequencies in memory as default, however, some may need to be reviewed before operation. All Burkert proportional valve operating parameters are provided by Burkert. When utilizing a different brand’s proportional solenoid valve with a Burkert controller, the operating parameters need to be inputted correctly for optimal performance.

A PI control loop (Figure 4) is a closed loop system which adjusts a control variable (i.e. PWM switching frequency) in relation to measured feedback provided from the process variable being controlled (i.e. pressure). The PI control loop uses parameters known as proportional and integral terms to dynamically adjust the control variable to reduce error. The 8611 can operate on a closed loop system, while the 8605 is only open loop.

The purpose of a PI control algorithm is to stabilize and reduce system error over time by accurately regulating a control variable. This method is widely used in fluid control processes. In theory, the algorithm is quite simple and relatively easy to implement in many applications. However, the controller must be tuned properly with the correct proportional and integral parameters. Without proper tuning, the control variable may overreact to system changes or oscillate around the desired setpoint. Since every process is different, each system will utilize different tuning parameters to achieve desired performance. Although several tuning methods exist, it is most common to manually adjust each parameter until stability is achieved. Most control system manufacturers will offer guidance for starting points. Without accurate inputs and optimized tuning parameters, control stability will be sacrificed.

The advantages of a closed loop control system such as a PI loop include: 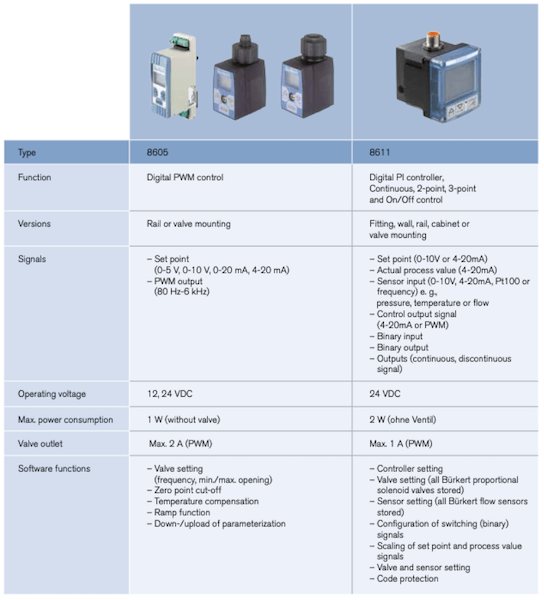 Click one of the links below for more information: